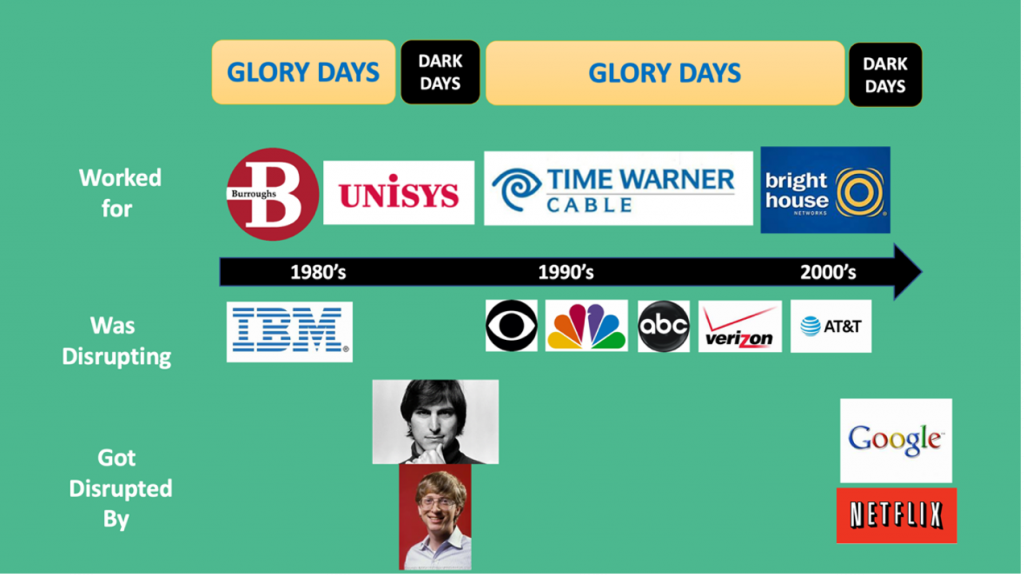 I was blessed to have experienced the glory days of two industries: computer mainframes in the 1980s and cable TV in the 1990s and 2000s. The career opportunities, perks, and bonuses during those glory days were great, but glory days do not last forever. They end when businesses get disrupted. They end with a painful period of cost-cutting, job eliminations, and major devaluations of 401k funds and stock options.

The obvious lesson is that being the disruptor is far better than becoming the disrupted. Here are a few more lessons I learned from working for both disruptive and disrupted businesses:

Only the Paranoid Survive

Andrew Grove, CEO of Intel during the 1980s and 1990s, wrote the book “Only the Paranoid Survive” after leading the strategic shift from memory chips to microprocessors that grew the company’s revenue from $1.9 billion to $26 billion during his tenure. His main lesson is to watch for the strategic inflection points in your industry so you can get ahead of the curve by planning your next market disruption early enough to replace the inevitable decline in revenue in today’s core business.

While Intel was making its bold move to pursue a new market, Burroughs (a $5 billion computer mainframe company that I worked for) made a bold move to acquire Sperry (another $5 billion mainframe computer company) to form a new company - Unisys. The press referred to this move as the “mating of the dinosaurs,” and it failed miserably. By merging, Burroughs and Sperry doubled their vulnerability to the oncoming disruptive impact of personal computers. The new company (Unisys) lost 98% of its market cap by not keeping pace with Apple and Microsoft’s innovations.

Lesson: Be paranoid. Don’t underestimate the startups attempting to take a share of your market.

Inaction in the face of disruption is the far more common cause of business failure. A bad reaction to a disruptive threat can lead to spectacular failures, though.

In the late 1990s, Time Warner was certainly paranoid about the inevitable declines of their print and music businesses as the internet emerged. They overreacted to the paranoia by going “all-in” with AOL. The deal was based on AOL’s insanely high stock valuation. The subsequent burst of the dot com bubble and disruptions of AOL’s business model by Google and Yahoo were devastating. Time Warner’s decision to merge was one of the worst business decisions of all time.

Lesson: Trying to be disruptive can be a high-risk venture.

A good way to mitigate this risk is to adopt the “fire bullets, then cannonballs” approach espoused by Jim Collins in his book “Great by Choice.” Collins suggested that the ability to turn small proven ideas (bullets) into huge hits (cannonballs) counts more than the sheer amount of pure innovation.

Jeff Bezos is the best example of this philosophy in action. He embraced failures at Amazon. He realized that the same culture of innovation that resulted in failed attempts in with phones, restaurants, and videogames also led to successes like Alexa, video streaming, and Amazon Web Services (AWS).

This “first bullets” approach conserves cash reserves too. Bullets consume far less cash than cannonballs. If your cash reserves are as deep as Apple’s, you can attempt to go “all in” on a new product idea (iPhone) that will completely obsolete your biggest cash generator (iPod). The rest of us are better served by firing bullets first.

Lesson: Find the balance between investing in disruptive innovations and preserving cash reserves.

Perhaps some CFOs who are less scarred from experiencing disruption (as I was with Unisys and Time Warner) are prone to be one-sided in the balancing between cash preservation and investing in innovation. After all, building and protecting cash reserves are at the core of what we CFOs do.

Experienced CFOs know that those who fail to invest in disruptive innovations will have their cash reserves drained when they lose market share to successful disruptors. We know that businesses must “disrupt....or be disrupted.”

To learn more about how your business can add an experienced fractional CFO from The Florida CFO Group to your team, click here.